Why You Should Be Worried About This Bull Market?

Markets (S&P500) registered over 170% on the fifth year of its birth. Now the excitement is still on track as we are close to the all time highs but there are some facts to be considered before blindly jumping on the tide.

Many analysts and advisers suggest cautious and selective investment in that phase of the market cycle. This sounds logical however the problem is that during drop or correction the correlation between assets is almost perfect. Thus led by the human fear of the masses one could hardly avoid the drop. Still it is better to know the big picture and decide for yourself what could you miss if you stay out of the market and what you could gain if you are in.

Here I am summarizing some of the recent research and data that support the cautious note on the state of the markets and the economy.
Historical economic recoveries
The history of economic recovery cycles could give some useful information. Lance Roberts of Streettalk Live in March 17 post shows some interesting statistics for the economic recoveries since 1879:
“Number of economic recoveries = 29
Average number of months per recovery = 39
Current economic recovery = 60 months (updated)
Number of economic recoveries that lasted longer than current = 6
Percentage of economic recoveries lasting 53 months or longer = 24.14%
Think about this for a moment. We are currently experiencing the 7th longest economic recovery in history with most analysts and economists giving no consideration for a recession in the near future.”
The chart below shows every post-recession economic recovery from 1879 to present.
As it appears growth could continue even more than the current 60 months. The question is would you take the risk when the risk reward ratio is not in your favor? Would you bet on 24.14% odd that recovery will last more than 53 months?
Valuation of the stocks
CAPE or cyclically adjusted price earnings ratio is one of the valuation benchmarks of the overall market. Readings above 20 are considered to reflect overvalued market. Most recent reading 25.72 is the third highest since 1881. Yes since 1881! It is lower only than the 2000 dot-com buble and 1929 peak preceding the black monday.
US president cycle
According to this theory the market generally hits a low point every four years in the first, post-election, or the second, midterm year. The following two years are the best performers. Current 2014 year is a midterm year and keeping in mind that we did not witness significant correction in the exceptionally good 2013 there is a high probability of serious drop. More detailed analysis you could find in my post “The connection between stock market and presidential cycle”.
Interest rate rise
The question what will happen when the long term interest rate finally rise greatly bothers the investment community? As suggested by the new FED chairman Janet Yellen the rise should be fact as early as April-May 2015. Here is the long term picture provided by Gina Martin Adams, Wells Fargo. The initial reaction would be sharp drop of the securities prices (lower CAPE, currently is at the elevated 25.72 level) followed by rally. 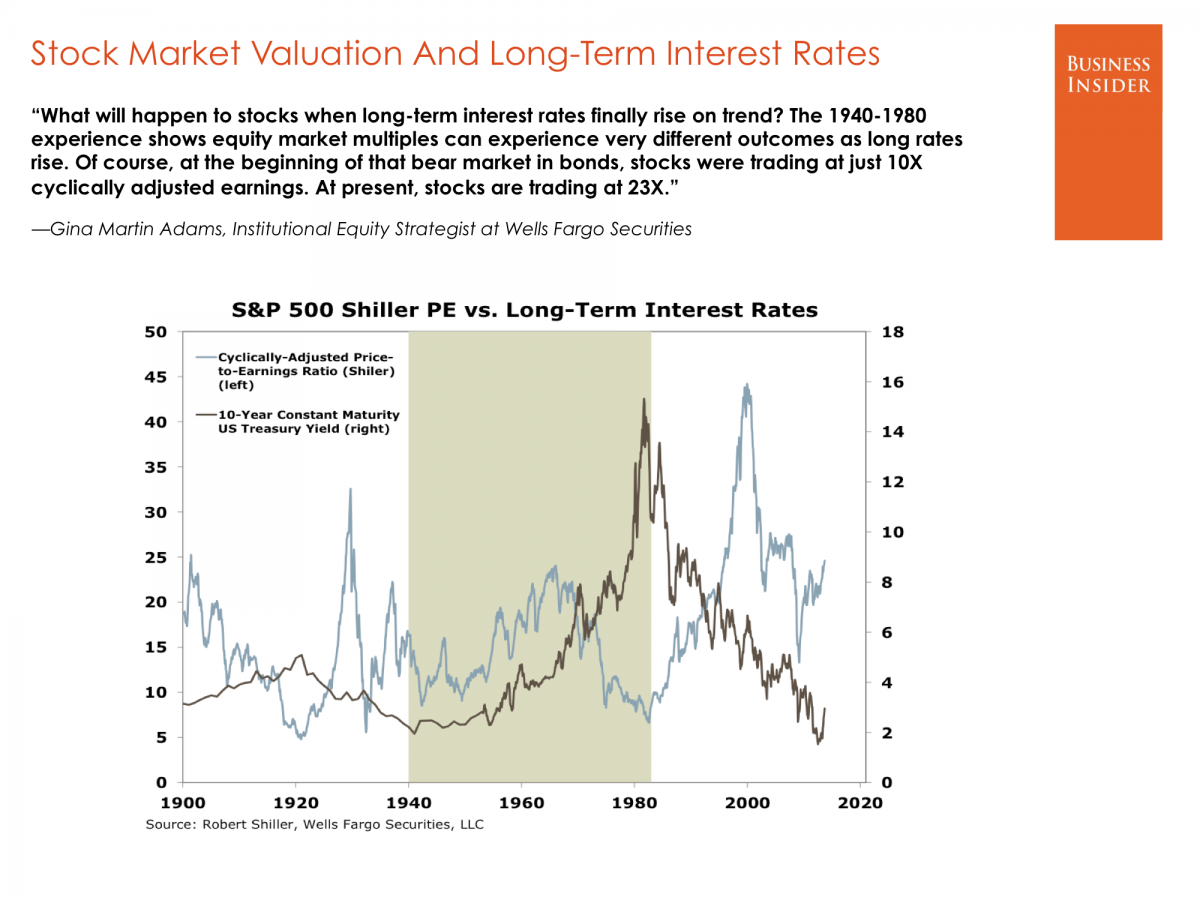 Declining capital spending
Capital spending as a driver for the GDP growth and could be considered as a leading indicator. In that regard David Bianco, Deutsche Bank, states:
“Normally in the middle of an economic cycle, investment spending is 2 to 3 times GDP growth. Strong investment spending is what drives S&P500 sales and non-financial profits. The whole debate about the S&P is about when this turns back up again.” 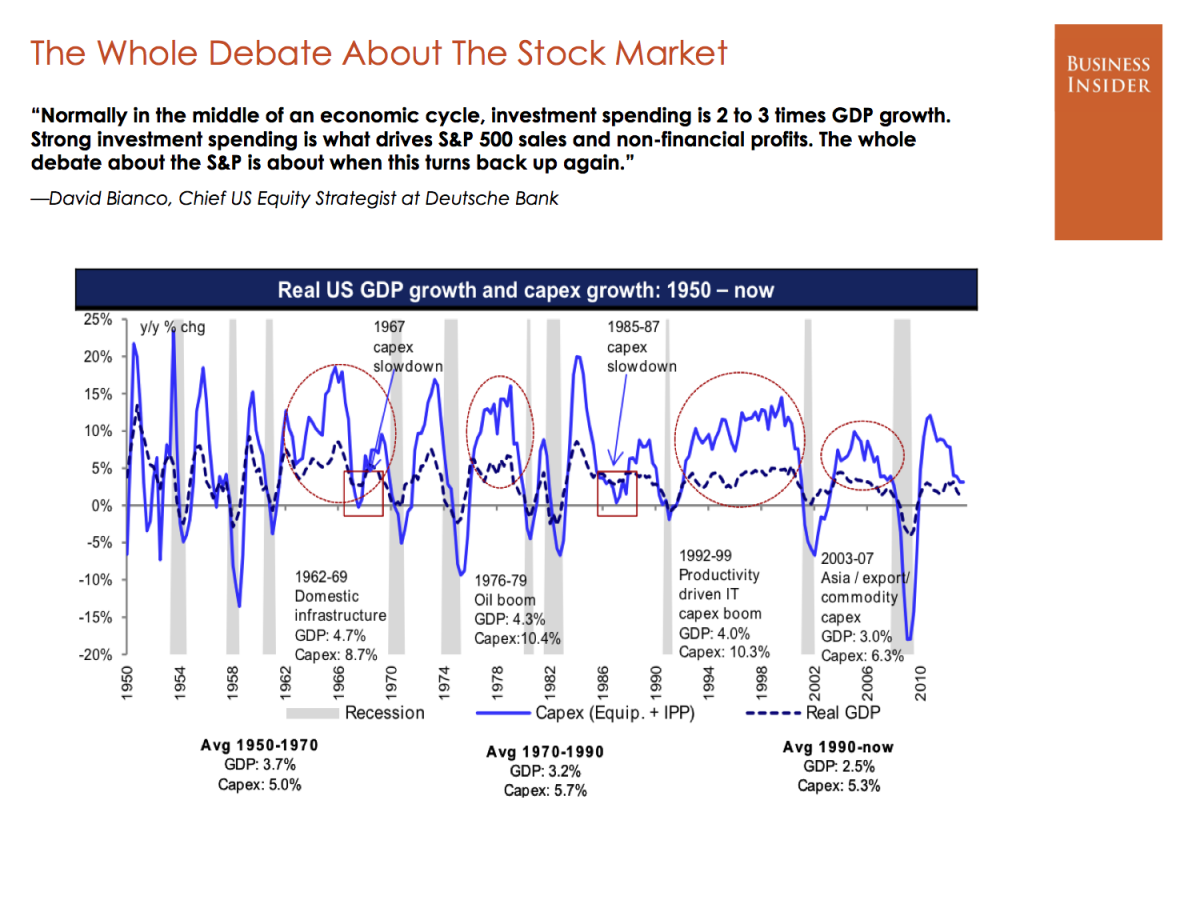 Looking at a short term chart reveals the reversing core CAPEX. Paul McCulley, the former legendary economist and fund manager at PIMCO, uses the three-month moving average of core capex orders as his preferred indicator of how the broader economy is going to perform a few quarters into the future. This indicator is still positive but decelerating which is serious point suggesting growth under pressure. 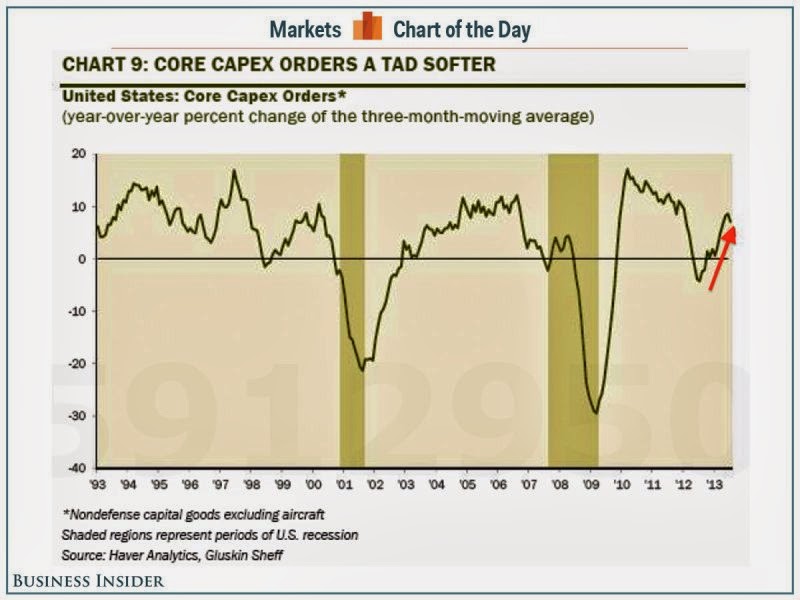 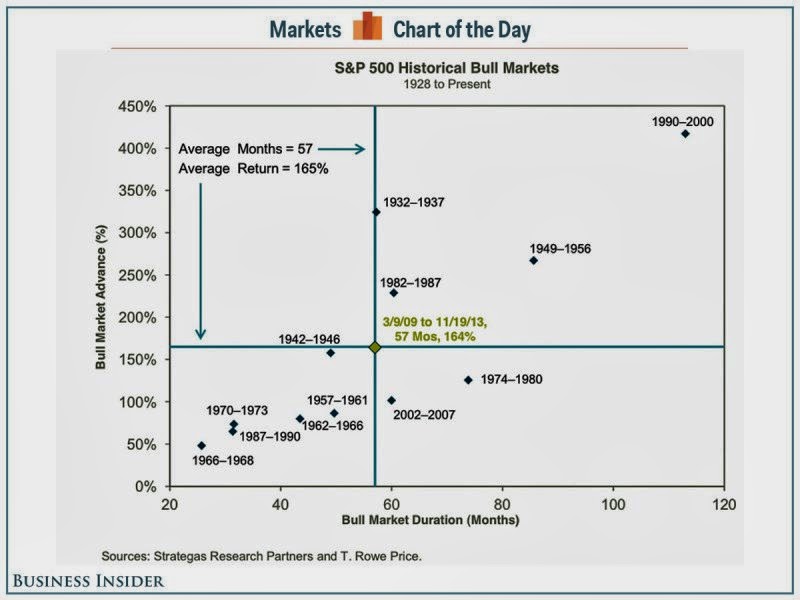 Another factor confirming the elevated status of current markets is the NYSE margin debt level. As seen on the chart recent all time highs are seen not only for S&P but for the margin debt as well. That indicates investors eager to pour money into the stock market. The most money are pumped the hither the stocks rise. However once the “fuel” keeping market machine working is reduced than the machine slows down. Previous two peaks in Mart 2000 and Jul 2007 were real predecessors of the market peaks seen few months later and followed by severe bear markets. The bottom line here: once we see a pull back in the margin debt we are in trouble.
NYSE Margin Debt Hits Another All-Time High, By Doug Short March 3, 2014
It is obvious that markets are at historical height, however they could stay in that state and even continue climbing for a long time before investors realize the real picture. Sometimes the real picture is invisible for the short term focused mass. Don’t be fool enough not to see the forest because you stare only at the trees.